It's 1997. Fin de siecle paranoia everywhere, prospects of renaissance wrecked between Chumbawamba at the Brits and 2K at Battersea. In a shattered bedsit, a teenager strings chords together on a beaten-up Squier, watching Russ Meyer movies on the nascent Channel 5 before going to turn tricks on Central Pier, sure the Golden Mile's illuminated but it doesn't light the darkness in his soul. In the Midlands a girl is grounded by the heaviness of the area's music and the prison of her body, drawn to bassy rumbles that compound the pounding in her head. In the North, rugby and docklands can't compete with Freddie or Debbie for one young ingénue. Any year now, the rise of Deathsex Bloodbath…

“This ain't rock and roll – this is sororicide…”

It's 2015. The Millennium Bug has become the Millennium bummer. Music hacks weep from exile on blogs. Kim ‘n’ Kanye bickering on Twitter fills newsprint but it doesn't fill the hole in the heart of the industry. When Deathsex Bloodbath, the biggest band of the 00s, faded from the scene, the business faded to grey just as Visage prophesised. This scene is an iron lung. Music used to be an archive of screaming orgasms. Now it's just screaming into the void, desperate for panache and verve (not The Verve, those lumpen luddites). Where art thou, Deathsex? The NME and the Melody Maker subjected the band to mealy-mouthed drone strikes from the IPC offices, but weren’t the rockist rockets just firing at themselves, since it meant that DSB vanished and took the music ragazines’ sales with them?

The time is right for Deathsex Bloodbath to declare war on terrible acts once more. They are armed to the teeth: red light/white heat from vicious percussionist Sororicide. Atomic regicide from mercurial guitarist Justin Appropriate. Switchblade, a singer as spectrally cosmic as a traveller from another world (which she is). And, of course, the hardcore core, the terrible two, Sadogasm and Masokiss. The planet needs DSB. The only question is whether it can still handle them. 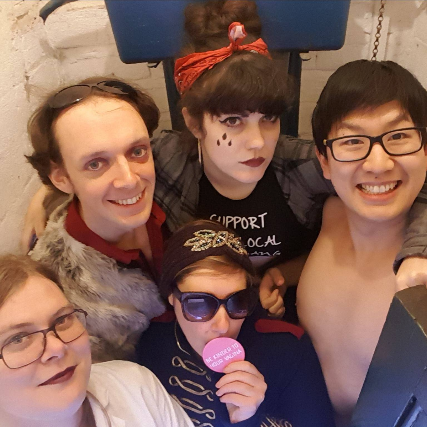