Shoot Festival is proud to present Sound: In Bloom; an evening of brand new music by three of Coventry and Warwickshire’s most exciting, emerging artists.

Expect a fusion of poetry and folk from The Mechanicals Band, a musical dream with captivating visuals courtesy of the They Come For You In The Night and a fresh new sound from Callum Pickard.

All of the musicians in the line-up performed as part of Shoot Festival’s Sound Stage in 2017 and have been commissioned to showcase their talent further with a new and original set.

Crossing genres, styles and platforming unique artists, Sound: In Bloom is the perfect opportunity to experience new music blooming out of the city.

THE MECHANICALS BAND
The Mechanicals Band has a reputation for originality and excellence. Tonight, the band are showcasing new music inspired by one of Coventry’s most famous poets, Philip Larkin. The group will take Larkin’s words and render them in to song with fresh, folk, jazz and classical instrumentation. The set will also include a retelling of Larkin’s life by a talented company of actors. (Contains adult-themed lyrics)

CALLUM PICKARD
Singer-songwriter Callum Pickard has a very unique sound. Inspired by dream pop, traditional brass, woodwind and strings skilfully fused with electronica, he brings his passion to create a daring and dynamic new set. Callum’s songs derive from personal experience and whilst sometimes abstract, his lyrics complement the fresh approach to his new sound. Collaborating with a multitude of local, national and international musicians, Callum is currently recording his debut album and will showcase four of these new songs at Sound: In Bloom.

THEY COME FOR YOU IN THE NIGHT
What would the world look like if Egypt had remained a super power since the time of the pharaohs? This is the question They Come For You In The Night dares to ask. With music, created on a bed of thick synthesised lines and glued together with booming reverb laden drums, combined with haunting intoxicating melodies and mesmerising projected visuals, we’re invited to musically immerse ourselves in a parallel world.

“Shoot Festival offers a really great opportunity for new, local performers to showcase and develop their work. Shoot not only offer paid performances but also development opportunities that are not offered elsewhere.” – Sarah Morgan 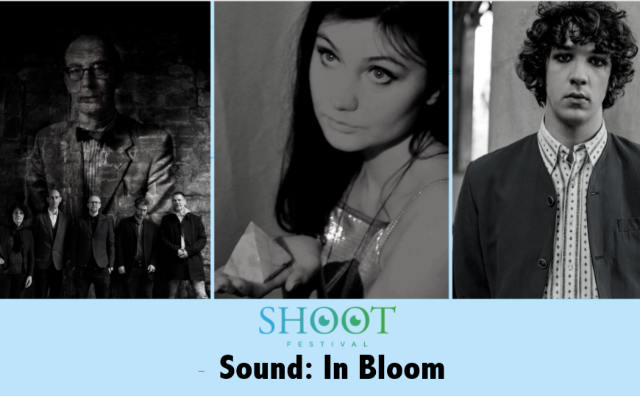