The Future Sound Of Cov

George Pannell started making music when a number of failed school band attempts prompted him to begin playing solo shows across Birmingham at the age of 16, using just a loop pedal and a sample pad. During this time, he released two demo tracks, The Truth and Royal Affair, in late 2017, the latter of which received backing from BBC Introducing WM.

George played his first full band show in December 2018, and has since played alongside the likes of SUGARTHIEF , FLING, BLOXX and SPINN, as well as selling out the iconic Sunflower Lounge in Birmingham.

In January 2019, he released his debut single ‘Fade Away’ (recorded with Ryan Pinson). This was met with a lot of positive feedback, with its dreamy indie pop sound incorporating influences from the likes of fellow Brummies JAWS and Swim Deep, to the shoegaze of My Bloody Valentine and the jangly guitars of Her's. It was labelled ‘a great record’ by Alex Noble on his BBC Introducing show.

Candid deal in a brutal emotional honesty funneled through songs as sharp as they are soothing. Searing guitar riffs, irresistible drum beats and a backbone of honest, unreserved lyrics deliver a commanding live show, not to be missed. After 3 hometown sell-out shows and an impressive string of support slots including Scouting For Girls, The Hoosiers, and The Pale White; Candid’s infectious indie rock has won the hearts of the local music scene with an unchained drive to take their music to the next level. 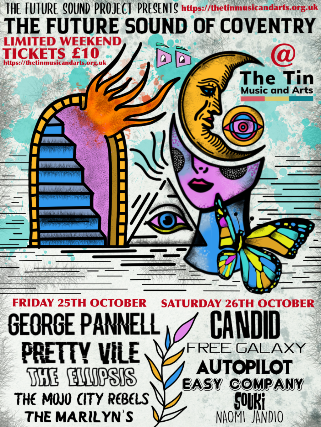