“One of the most singular producers in contemporary music”– Boomkat

Sandro Perri is a musician and producer based in Toronto. He has released over a dozen records of original vocal, instrumental, acoustic and electronic music and worked on countless others in various creative and technical roles. A selected discography of his studio work as a recording, mix and mastering engineer can be found here.

His most recent solo release, In Another Life, is an experiment in ‘infinite’ songwriting. The record is comprised of two side-long tracks, with special guest appearances by Andre Ethier (The Deadly Snakes) and Dan Bejar (Destroyer). Pitchfork included the title track in their Top 100 Of 2018 and called the record “visionary in both content and form.”

Sing Leaf’s David Como never really meant for Shu Ra to be heard by anyone. “Some things only retain their power if you don’t talk about them,” he says – and so even his friends and family knew little of the music he recorded, in an attic space so small he couldn’t stand up in it. Music, for him, had always been an “individual, therapeutic thing.” It wasn’t until Sandro Perri, his friend and fellow musician, discovered Shu Ra in all its mystical, genre-bending glory, that the album got the chance to reach beyond the confines of that cramped attic.

That attic, though, is where the Toronto-based musician felt most free to create. After going through a divorce, and finding himself “suddenly on my own, starting again,” he used his time alone to reflect on the past while trying to unstick himself from it. The attic became his sanctuary. “I like enclosed areas,” he says, “the safety of it, the comfort of it, and it sort of became this place where I could go away.” When he did break away from it, to record one song live with a band, he found the experience painfully awkward. “I’m naturally shy when it comes to recording. I like to do that alone, so it was a weird experience.” In this respect, Shu Ra (his second album after 2013’s Watery Moon) is the product of introversion – but its musical palette is anything but. It paints with sweeping, colourful strokes, dotting middle Eastern flecks onto psych-rock and folk, blending organic instruments with electronic synths. For the most part, the music bubbles with optimism – Distant Morning is distinctly cinematic in its reverie, and the refrain of Somewhere In The Night bursts like the sun breaking through clouds – even if the lyrics tend to pierce the sanguine simplicity. 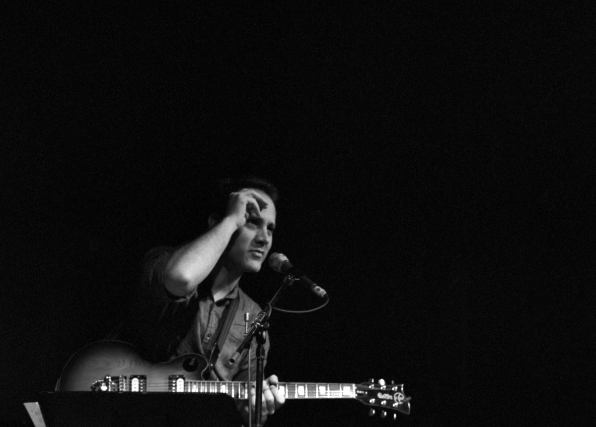