Featuring:
The debut headline performance from Rattlesnake.
3 more awesome bands fresh out of Coventry: Rise to the Sun, Zemli and Warning Light.
An after party of indie and rock bangers until 2am in the morning.

Just a little info about Rattlesnake:
Formed in 2019 at the University of Warwick outside of Coventry, this 5-piece garage/indie/psych rock band has much to offer to everyone, and even more to prove; that rock isn’t dead. On stage or off the stage the band is full of powerful personalities with energy levels to match their exciting and loud sound. This is definitely a band to be watched closely, as many good things are to come, such as their new single “Sherbourne’s on Fire”.
The band was formed in 2019 by like-minded university students who all wanted to play a heavier form of music to what is the status quo. Inspired by bands like Tame Impala, Pink Floyd, and King Gizzard and the Wizard Lizard, they do not attempt to emulate them, but instead let themselves be inspired by them, and find a new sound close to their inspirations. Their motivation is not one of fame or money, but instead a desire to play music which holds a massive influence on their lives and they want others to too experience the music they love.
The band is headed by lead guitarist George Egerton, the primary songwriter and an excellent guitarist. The riffs he writes get stuck in your head as you leave their gigs humming their tunes. Under his direction is Antina Hu, the powerhouse of a vocalist. She is always a talking point after a gig for how strong her voice is and how she can perform under any difficulty to provide an amazing show. The bass guitar is played by Taylor Adam, with his infectious energy – bouncing with a smile – on stage and off stage. The drums are provided by Robert Allison. While he may not be seen on stage as easily, his presence is felt fully throughout their entire performance, as you hear his drum beats directing and grooving the audience. The final addition to the band was at the start of 2020, with the addition of rhythm guitarist Jonah Nicholson. Providing the background noise and noticeably a very fun presence on stage, his inability to stay still while performing adds to the already vast reserves of energy the band has. Alongside the energy the songs have, just watching Taylor and Jonah play together gets any crowd going as the vibe becomes too infectious to stay still.
With a vast selection of songs being performed, from the rockesque tunes of Lone Ranger, Lady with a Dog and Pink Lemonade to more psychedelic songs like Dennis in Wonderland and the aptly titled The Groovy One, Rattlesnake has much to offer to the musical world. This is coming in their new EP titled “Sherbourne’s on Fire ” featuring the title track alongside B-side ‘Sunny Day Delight’. The former was written after Sherbourne (a Warwick on-campus accommodation) caught on fire, leading to Jonah being evacuated from his flat as the fire was out of control. This EP captures the more catchy and indie side of Rattlesnake, whilst still being distinctly them. 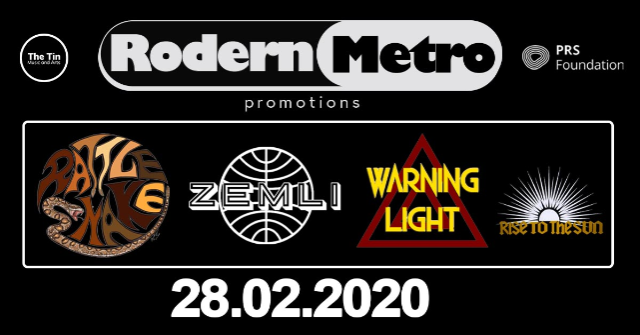