Luna Kiss have been revelling in a constant state of creative change for the last seven years. But it is only in 2017 that the Coventry quartet’s extraordinary, amorphous vision has truly come into sharp focus. Six years on from the release of their acclaimed debut album Echoes Of Sound, Luna Kiss are poised to return with a new collection of songs, Following Shadows.

Do not be fooled by the angelic appearance of Agoraphobia, these girls, they have indie garage rock in their blood. Despite their youth, they have won the Vodafoneyu Music Talent, which has led them to tour throughout Spain with top-level artists such as Russian Red or The Zombie Kids.

With a highly explosive base, the pressure on the stage is the best mattress for powerful and forceful guitars. Among them, the very personal voice of Susana becomes hollow, with an overwhelming character that seduces the most demanding audience.

The Ellipsis have a creative fusion of indie and alternative rock fuel songs which are as catchy as they are melodically dramatic and lyrically insightful. Never creatively standing still, The Ellipsis persistently push and find evolution in their sound, resulting in tracks like the single ‘Wasted Potential Me’ with an equally dynamic video which has already won two national awards at The British Film Institute in London and their current single, ‘Cold Cactus’. 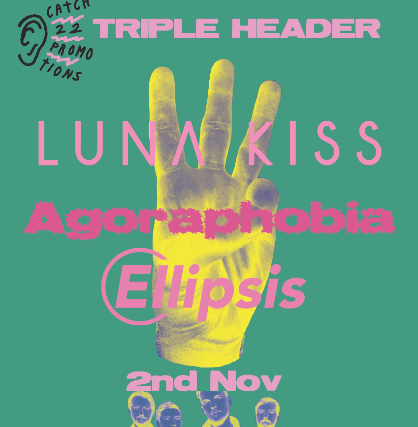