Larry Bartley is a bassist/composer who has been a staple of the London & international jazz scene for the past 20 years as a side man and as a leader. He has played & recorded in the bands of Abdullah Ibrahim, Denys Baptiste, Steve Williamson, ingrid laugbrock, Jean Toussaint, Stanley Turrentine, Steve Grossman, Harold Mabern, Donald Brown (of Art Blakey’s Jazz Messengers), David Murray, Orinn Evans, Gary Bartz, Jerry Dammers Spatial AKA Orchestra, and byron wallen. Larry’s 2003 debut album, “ALONG THIS WAY” was nominated for ‘best new work” in the BBC JAZZ AWARDS.
He also leads his own groups “JUST US!” featuring Tony Kofi, Ed Jones, & Rod Youngs, who in 2014 released their debut album “BEAUTY IN THE HIDEOUS”, and “THE LARRY BARTLEY TRIO” with pianist Bruno Heinen and drummer Rod Youngs. Larry was Nominated for the Paul Hamlyn Foundation Composers Award in 2015.
Larry has also performed in various theatre shows & Hollywood feature films including the Soundtrack for the 1997 Mike Leigh film “CAREER GIRLS”, the theatre and touring production of “THE NAT KING COLE STORY” (starring Clarke Peters of “The Wire”), the 2011 Simon Curtis film “MY WEEKEND WITH MARILYN” staring Michelle Williams and Kenneth Branagh, and the Soundtrack to the 2013 Biyi Bandele Movie “HALF OF A YELLOW SUN” starring Thandie Newton and Chiwetel Ejiofor.

“Excellent Bassist, with a distinct Mingus-like drive to his propulsive bass lines” ___ Time Out

“You can understand why Bartley is so much in demand on the london Jazz scene.” ___ BBC

“Larry taps into a vast pool of different types of music to create a unique project that deserves to be applauded” ___ Jean Toussaint
The trio of Bassist/composer Larry Bartley, pianist Bruno Heinen, and drummer/percussionist Rod Youngs, made their debut at London’s famous Ronnie Scott’s Club in 2016 and have since performed throughout the UK and Europe. Their repertoire consists of a mixture of original compisitions written by each member of the trio, plus their own interpretation of songs from the jazz and soul songbook.

Bruno Heinen – “Erudition, eclectic studies and a jazz sensibility make Heinen the kind of newcomer who repositions the goalposts.” 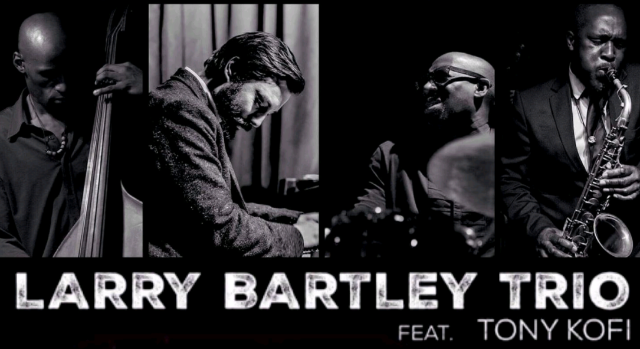