Jeffrey Lewis & The Voltage play a brilliant style of scuzzy urban indie-rock-folk, like a 21st Century mash-up of Sonic Youth, Pete Seeger and R. Crumb. Born and raised New Yorker Jeffrey has pursued a relentless touring schedule around the world ever since 2002, as well as playing as the opening act for bands like the Mountain Goats, Daniel Johnston, Stephen Malkmus & The Jicks, Dinosaur Jr, The Fall, Dr. Dog, Pulp, Roky Erickson, The Vaselines, and more. Jeffrey has released eight critically acclaimed albums on Rough Trade Records and Don Giovanni Records, and Jeffrey continues to self-publish his art and writing in an ongoing underground comic book series called Fuff. Current bandmates the Voltage are Brent (Moldy Peaches) Cole on drums and Mem (Cat Tatt) Pahl on bass and keys. This is really the same band that has been touring 2016-2019 as Jeffrey Lewis & Los Bolts, but Jeffrey continues his tradition of changing the band name with each album… Their new full-length album “Jeffrey Lewis & The Voltage: Bad Wiring” was recorded in Nashville with producer Roger Moutenot (Yo La Tengo), and will be released November 1, 2019, on Moshi Moshi Records in UK/Europe and Don Giovanni Records in the USA.

“[Jeffrey Lewis is] The best lyricist working in the US today.” – Jarvis Cocker (Pulp)

"Bands as magical and genuinely original as this are as essential as oxygen." – Culture Delux

"Jeffrey is the only artist I've sent fan mail to.” – Jens Lekman

"Really great and impressive and inspiring and exciting… There's not a lot of people that can tell a story and use language like that in music." – Will Oldham 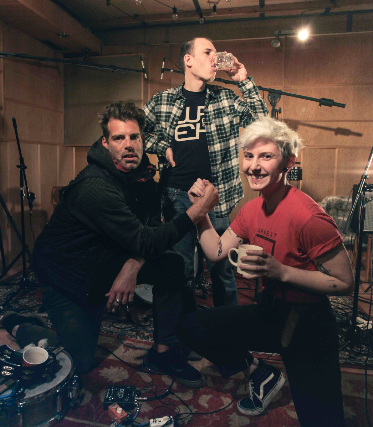