Batcsh and Jackdaw With Crowbar double biller!
Tickets: £5 adv/£7 on the door.

JACKDAW WITH CROWBAR
Since 1985 Jackdaw with Crowbar have been unsettling audiences all across EUROPE with their un-genred approach to live music with film. John Peel was obviously unsettled when he invited them back for a second Radio 1 session in 1987.
Back in the day an assorted combo of regional musicians coming together to stir political soup loud in your ears, eyes and face. These days the core remains, embracing technology in a bright montage of ever relevant visions. The contemporary electronic sound brings together dub bass, pleasing melodies, dancing beats, funny little chords that are almost but not wrong and a vocalist that would steal your straight jacket given half the chance!
Oh, and a poem about Brexit x

BATSCH
Batsch are a ‘dark disco’ trio based in Coventry, England. Their smart, groove-oriented dance-pop takes nods from classic art rock like Talking Heads as well as modern contemporaries, such as Little Dragon and Dutch Uncles. The band formed in 2013 but the collaborations of singer/guitarist Mason Le Long, bassist Joe Carvell, drummer Matt Rheeston and keyboardist Andy Whitehead date back further. A previous incarnation of the band, DON’T MOVE!, released its only album, ‘The New Pop Sound’, on Tin Angel Records in 2009. All four members have also toured extensively with other artists, including Laetitia Sadier, Marker Starling, Devon Sproule and Nicholas Krgovich, many of whom are also on Tin Angel’s roster, putting Batsch at the epicentre of the British label’s cult international scene.
Batsch released their debut EP, Tiles, in October 2013 and its follow-up, also a five-track EP, Collar, in 2014. Their debut full-length album, almost-eponymously titled Batch, was released April 2017 on Tin Angel Records. Its follow-up is hot off the press, so look out for new material in 2019.
“Delightfully off-piste electronic pop music.”- Clash
“A mellow and tireless exploration into disco melancholy.” – Artrocker
“..a dark disco classic…” – Subba Cultcha
“Bursting with ideas” – God is in the TV
“Quirky, cool and a little detached..” – Lost in the Manor
“..beguiling mixture of seductive indie and pop.” – Raw Ramp
“This band is the very definition of eccentricity.” – Holy Up Now 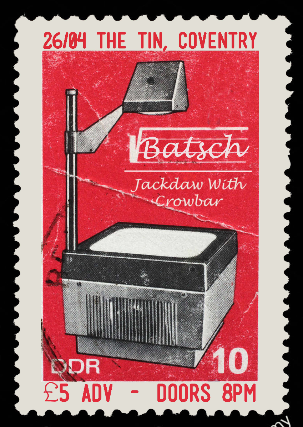