Dirty Sound Magnet is a psychedelic rock power trio from Fribourg, Switzerland. The band’s DNA can be traced back to the ancestral ‘Golden Age of Rock’ (60s, 70s), but it would be incorrect to think that DSM is…“retro”. The musicians are inspired by contemporary artists and modern production techniques; pushing the boundaries as they see fit. The results are personal, unique and original. Simply put: the Dirty Sound Magnet experience is a mystical journey back to the future…

In 2017, DSM released its third album, Western Lies. The results were instantaneous, with the band winning an award in the category of “best Swiss rock song” for their single ‘Homo Economicus’. Between 2017 and 2019 the band toured relentlessly, playing over 200 shows internationally. Their new album, titled Transgenic, was released on the 18th of October 2019.

Support from Leamington Spa psychedelic rockers Satsangi and Warwick University band Tamarack. Satsangi play “world influenced pysch-rock-n-roll’. With three albums under their belt they have gigged with the likes of The Kills, Dr Feelgood, The Primitives, Saint Agnes, Fields, The Moons, plus at multiple high level festivals. Tamarack are a pseudo post stucturalist progressive rock band. Focusing on exploring the world that has slipped between the cracks through kalaidascopic soundscapes and soaring melodies. 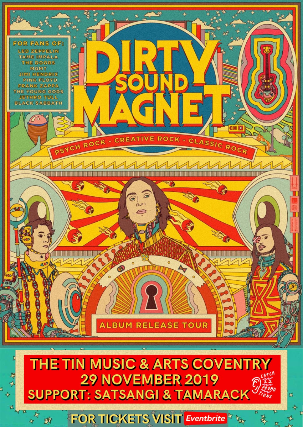