★★★★ ‘Consistently fascinating, unfolds like a warning from history. Powerful material’ -The Times

★★★★★ ‘It’s clever and atmospheric, and the contributions from the various interviewees are thoughtful, funny, melancholy and cynical. -Culturefly​

New Town Utopia is a film about utopian dreams and concrete realities – a feature documentary that tells the story of the British New Town of Basildon, Essex. After World War Two, New Towns were designed as social utopias, built to create a ‘new type of citizen’ – with public art, homes by progressive architects and work for everyone. Basildon and its pioneer residents were invested with these post-war hopes and aspirations. 60 years on, the town has deteriorated, degenerated and desaturated. Art and culture are almost a distant memory and Basildon is often referred to as the worst town in Britain. The original plans and architecture, once thought so progressive, are now vilified in the face of a terrible reputation, struggling local economy and fragmented community. Using art and culture as a lens – the film explores the development of the town from socialist stronghold dubbed “Little Moscow on the Thames” to becoming a Tory stronghold and home of the right-wing ‘Basildon Man’. A destabilising, significant shift from community to individual over an incredibly short period of time. An audiovisual journey through populated ruins, New Town Utopia is brought to life through the memories stories and performances of artists, musicians and poets from Basildon. Facing austerity, adversity and personal challenges these are individuals driven by their creative spirit to help their community through art, poetry, music… and puppets. Featuring a voice over by Oscar-winning actor Jim Broadbent (Iris, Moulin Rouge, Sense Of An Ending). New Town Utopia is directed by Christopher Ian Smith (Arterial), with Margaret Matheson (Scum, Sid and Nancy, Sleep Furiously) as Executive Producer. 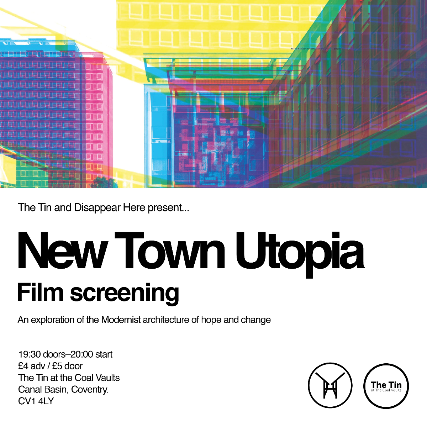